In Bulgarian civil court system hierarchy there are 3 levels: 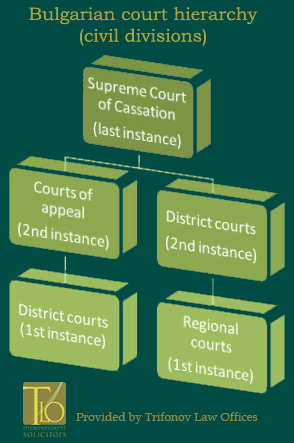 On the next level in Bulgarian judicial hierarchy are the district courts. They act as second instance courts for appeals against decisions of regional courts. But they are also first instance for some more complicated cases:

Sofia is the only exception to have 2 same level courts – the Sofia City Court (for those based in the city of Sofia) and the Sofia District Court (for all based around Sofia).

Bulgarian courts of appeal act as second instance for cases heard in a district court as first instance.

If the first instance has been one of the lowest level courts (regional) then second instance court should be the respective district court.

Another very important question is: which out of many same level courts should the claim exactly be filed in? The answer to this question is in Art.105 of the Civil Procedure Code: The claim shall be filed in the court, within whose region is the permanent address or the seat of the defendant. To put it simply – it is important who exactly the claimant will be taking to court. If for example one has to sue a company that has built some property in the town of A and has an office in the town of B but at the same time is based in the town of C – then the claim should be filed in the C courts (regional or district).

There are a few very important exceptions though.

The second big exception is regarding all tort claims – they may also be submitted at the place of commission of the harmful act. Please note that they could also – depending entirely on the claimant’s decision – be filed in the court where the defendant is residing or based.

And the last of those 3 is the contractual jurisdiction – according to Art. 117 of Bulgarian Civil Procedure Code:
The parties involved in a property dispute may state in writing another court, different from the one, under whose jurisdiction the lawsuit is as per the rules of the jurisdiction by location. This provision shall not be applied to the jurisdiction under Art. 109.

This website uses cookies to improve your experience while you navigate through the website. Out of these, the cookies that are categorized as necessary are stored on your browser as they are essential for the working of basic functionalities of the website. We also use third-party cookies that help us analyze and understand how you use this website. These cookies will be stored in your browser only with your consent. You also have the option to opt-out of these cookies. But opting out of some of these cookies may affect your browsing experience.
Necessary Always Enabled
Necessary cookies are absolutely essential for the website to function properly. This category only includes cookies that ensures basic functionalities and security features of the website. These cookies do not store any personal information.
Non-necessary
Any cookies that may not be particularly necessary for the website to function and is used specifically to collect user personal data via analytics, ads, other embedded contents are termed as non-necessary cookies. It is mandatory to procure user consent prior to running these cookies on your website.
SAVE & ACCEPT
error: